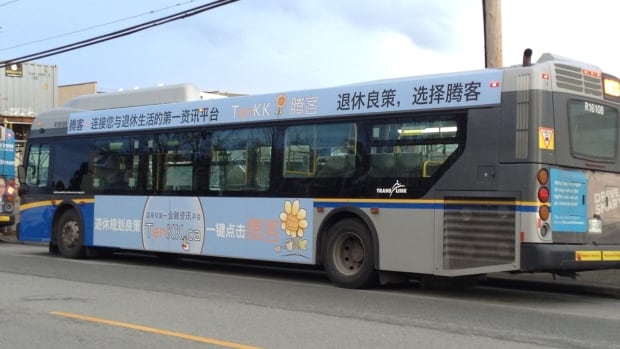 TransLink says there are currently three buses that have advertisements predominantly in a Chinese language, featuring none or a few English words. (Kerry Starchuk)

Some TransLink buses in the Lower Mainland have been singled out because they carry Chinese language ads.

Some Richmond residents are upset with TransLink for not requiring the advertisements to be in English or French.

One resident, Kerry Starchuk, says she has spotted buses in Vancouver, Richmond and Ladner with ads that are mostly in Chinese.

« Our demographics in Richmond are Chinese, but what about the remainder of the people that live here? » said Starchuk.

« I would like to see the ad in English first then any other language that they desire, » said Richmond resident, Michelle Mitchell.

But according to a TransLink spokesperson, there are no provincial or municipal laws in B.C. that require advertisements to be in either of Canada’s two official languages.

On that basis, they say TransLink has no authority to deny advertising in any language as long as it meets its advertising guidelines, which have no restrictions on which language is used.

This is absolutely disgraceful… BC needs a language law to put an end to this nonsense. I can’t do it alone. I need a team of professionals to help. This picture was taken on Steveston Highway in Richmond.

Freedom of expression in bus ads

Starchuk has been petitioning TransLink and Richmond city council to require at least 50 per cent of bus advertisements to be in one of Canada’s official languages.

TransLink has changed its advertising policy in the past.

In 2009, the company’s previous advertising policy was challenged when it refused to post a political advertisement on the sides of buses.

The Supreme Court of Canada ruled that part of the policy, which prohibited advocacy advertising, violated the complainant’s right to freedom of expression.

A TransLink spokesperson says due to this legal precedent, the company expects it would encounter a similar challenge and outcome if it were to change its advertising policy to limit what languages can be placed on signs.

TransLInk says that unless the province or a municipality passes a law that directs this kind of change, it will continue to allow Chinese language ads on its buses.

According to a background paper from the Library of Parliament, B.C. is the only province or territory not to have a legislative policy or regulatory framework in place to recognize official languages.

Meanwhile, the City of Richmond says that although it requires — by contract — advertisements on bus shelters to feature at least 50 per cent English, buses and transit stations are within TransLink’s jurisdiction.

A spokesperson for the province said no provincial legislation exists that would govern language policy for TransLink.

​As for Starchuk, she says she would like to put the matter to rest, but it would require the province taking the initiative to implement a language law that would give British Columbians better direction.